“Will, Vanessa, and Michael have all dedicated themselves to serving our community and honor the spirit of Dr. Martin Luther King, Jr.,” said County Executive Parisi. “Whether it be Will’s commitment to mentor local youth, Vanessa’s work to support women and social justice, or Michael’s efforts to champion youth and their families, each recipient has worked hard to strengthen our community. Congratulations to each of them for receiving this honor and working to lift our community during these challenging times.”

“This is an outstanding group of awardees, and each of them is doing critical work in our community. Through their work across Madison, they are supporting families, providing needed services, and challenging us to be a better, more equitable city,” said Mayor Rhodes-Conway. “I am honored to present a 2022 Martin Luther King Jr. Humanitarian Award to Will Green, who has supported youth through sports, urban agriculture and entrepreneurship, particularly in the Darbo Worthington neighborhood. He is a visionary who works every day to make his vision a reality.”

The City and County will present the awards at the annual City-County Martin Luther King, Jr. Observance on Monday, January 17. The program will run from 6:00pm to 7:00pm. Due to the COVID-19 pandemic, the event will be held virtually. More information and instructions to access the observance will be posted at http://mlkingcoalition.org.

Will Green is the founder of Mentoring Positives, Inc., a mentoring program working with youth in the Madison community. Will is also the head coach for the girls varsity basketball team at Madison LaFollette High School.

Will married Becky Green in August 2002. They have two daughters, Malia and Skylar. He has a bachelor’s degree in Psychology from the University of Upper Iowa. Will is also a board member of Community Shares of Wisconsin and Northside Planning Council.

Will has over 25 years of experience working with youth and families with behavioral and emotional issues. Mentoring Positives, Inc., which Will created 18 years ago, creates meaningful positive relationships that build on young people's positive assets to develop successful productive citizens now and in the future.

In July of 2017, Vanessa McDowell became the first Black woman CEO in YWCA Madison’s 112-year history. Vanessa is deeply committed to offering programs and services that support women and social justice, help families, and strengthen communities. She has a passion for serving others by leveraging voices that have been silenced as well as empowering others to live out their purpose. She works from an empowerment model, which aligns with the mission of the YWCA Madison to eliminate racism and empower women.

Vanessa was born and raised in Madison, WI. She attended the University of Wisconsin-Madison and earned her bachelor’s degree in Sociology. Prior to joining YWCA Madison in 2014, Vanessa worked for UW-Madison’s Wisconsin Equity and Inclusion Laboratory and was the Executive Assistant to the Pastor for Mt. Zion Baptist Church.

Michael Johnson is the President and CEO of Boys & Girls Clubs of Dane County. He has led the agency on an amazing journey of change, transforming the organization from a local children’s charity to a change agent for children and families, while driving high standards of excellence in financial transparency, community engagement, and governance. These efforts tie into the goal of making a significant, measurable impact in the lives of children and their families.

Recently, Michael was successful in lobbying the State of Wisconsin to erect a statue of Vel Phillips, who will become the first Black woman in the United States to have a singular statue at a state Capitol. He raised more than $15 million dollars last year for a new regional workforce center, while raising $7 million in operating dollars to support thousands of school age and college students during the pandemic. Michael also raised funds to support small businesses, while gifting cars to families in need, helping families with mortgage down payments, and providing mentoring and support to grassroot local businesses and nonprofits.

Michael recently received Boys & Girls Clubs of America’s Heart & Soul Award, the highest honor among club executives. He was named “Man of the Year” by Madison 365 and was named “2022 Executive of the Year” by In Business Magazine. Michael earned a bachelor’s degree in Business Education from Chicago State University and a Master of Business Administration degree from the University of Phoenix. He also holds certifications in fundraising management, human resource management, nonprofit strategic management, and advanced leadership. 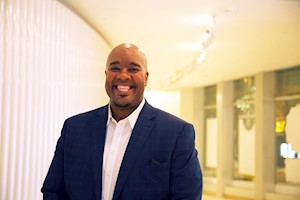